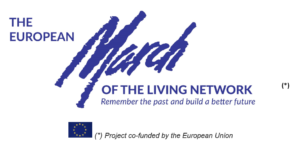 MISSION
To enhance and enlarge the community of concerned European Citizens and strengthen their response at national and EU level to racism, antisemitism, antizyganism, xenophobia, hate speech and other forms of intolerance and racial bigotry.

OBJECTIVES
Enlarging the participation of Young Europeans to the March of the LivingSince the first March of the Living was held in 1988, over 250,000 participants, from 52 countries, a majority of them teenagers and young adults, have marched down the 3-kilometer path from Auschwitz to Birkenau on Holocaust Remembrance Day – Yom Hashoah – as a silent tribute to all victims of the Holocaust.

Now we should ensure that more young people will listen to the last Holocaust witnesses and become the new generation of witnesses, keeping in mind Elie Wiesel’s legacy: “When you listen to a witness, you become a witness”.

The EMOTL – European March of the Living Network project

This EMOTL RBF France, based on its Mission Statement,

 Build the Future based on the lessons of our Historical Heritage and of the tragedies of the Past.

Repair the present and Act to build a better Future:

Foster the common values of Tolerance, Democracy, Rule of Law and Peace:

 Promote the basic and core values of Tolerance, Democracy and Peace in different regions of the World.

 Unite Democratic forces in leading to peaceful solutions of conflicts between Nations and amongst them.

 Foster Inter-religious dialogue and understanding between the Peoples

 Combat all forms of Racism, Xenophobia and Anti-Semitism,

RBF France also helped in drafting the Auschwitz Birkenau declaration which was proclaimed at the main Remembrance Ceremony in Birkenau.

The High-Level Representatives of nations and of organizations, participating in the March of the Living 2017, declared:

“We take upon ourselves the solemn commitment to remember and to commemorate the millions of Jewish victims of the Holocaust, the Roma Genocide as well as other Holocaust related mass atrocities. We shall respect the survivors still with us and honor those who resisted the evil of Nazi tyranny.

We will commit to combatting all expressions of Holocaust denial, Antisemitism, Antiziganism and any form of racism or intolerance. ..

We will promote Holocaust education and remembrance in our schools and universities and provide appropriate teaching materials and resources, to ensure that future generations understand the causes of the Holocaust and reflect upon its horrendous consequences.”

During the discussions the European officials acknowledged the importance of the educational work made by the March of the Living over the last 30 years and asked for a more structured partnership in order to allocate more funding to develop and to disseminate the educational impact of the March of the Living (further to their commitments as reflected in the Auschwitz Birkenau declaration here below).

They also referred us to specific European funds available for Holocaust remembrance and for Holocaust education, and for educating young generations to understand the causes of the Holocaust and reflect upon its horrendous consequences.

Based on that RBF France continued to partner with the International March of the Living and applied to a call of the European Commission for 4-Year Framework Partnership Agreements to support European networks active in the area of racism, xenophobia, homophobia or other forms of intolerance

Since one of the main eligibility requirements of the European Commission for this specific call, was to have a partnership with a network of European organizations, entities of at least 14 EU member states, RBF France and the International March of the Living joined their forces and they established in August 2017, EMOTL – The European March of the Living network association in Brussels as the organizational platform for the network founding partners.

RBF France is now continuing implementing the EMOTL project co-funded by the European Commission under a 4th Year Framework agreement 2018-2021.

Main objectives of the EMOTL project:

1°. to enlarge and to enhance the community of concerned European Citizens and strengthen their response at national and EU level to counter racism, antisemitism, antizyganism, xenophobia, hate speech and other forms of intolerance and racial bigotry.

2°. To build a pan-European network of partners in order to initiate fruitful partnerships, exchange of best practices and of information.

4°. to promote education programs about the dangers of intolerance through the study and research of the Holocaust and other genocides.

The partners of the EMOTL Network

RBF France reached out many stakeholders and the EMOTL network founder partners are:

– the March of the Living associations in Hungary, Netherlands, France, Belgium and UK.

– the Remembrance Forum associations of Germany, France and Italy (see here below)

– and other national organizations and leading Jewish Communities in Europe who are already involved in the activities of the March of the Living.

EMOTL – The European March of the Living network project 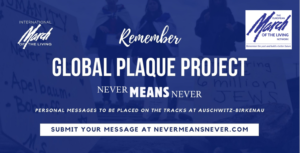 On the commemoration day of the Kristallnacht, pledge to shine light over the darkness of hate – 9/11/2020