 RBF Germany was established, at the end of 2011, by several Former members of the Bundestag together with Civil Society Leaders and under the patronage of Professor Rita Süssmuth, Former President of the German Bundestag.

 Since the focus was on Asia, it took more time to identify relevant stakeholders and experts on those issues and therefore after many preliminary contacts and preparatory meetings in 2012, the association decided to start its cycle of Conferences and activities in 2013.

“The Human rights situation in India with Special regards to Ethnic and Religious Minorities in the World’s largest Democracy” hosted by the Chairman of the Bundestag Committee for the relations with India.

• Dr. habil. Christian Wagner, Head of Asia Research Group at the Institute for International and Security Affairs in Berlin

• Further on, the association organized another Hearing about “Understanding Ethnic and religious Conflicts in India: Causes and Implications” chaired by Mr. Josef Winkler, Mdb a.D. and with the active participation of Dr Ute Finckh-Kramer and Mr. Wilfried Lorenz, MdB.

• RBF Germany also identified and approached Indian experts for this panel like:

• Professor Ram Puniyani, from India, author of several books and recipient of the Indira Gandhi National Integration Award in 2006 and the Indian National Communal Harmony Award in 2007.

 In March 2014, the German Association RBF Germany, organized a hearing at the Bundestag on “Best practices to Prevent Communal Violence; Lessons from India”, in presence of Members of the Bundestag.

• Harsh Mander, Director of Centre for Equity Studies and Special Commissioner to the Supreme Court of India in the right to Food care

 Further on, in April 2014, RBF Germany organized another Hearing in the Bundestag in presence of members of the Bundestag about “Trouble spot Northeast India – Geopolitical implications: Humanitarian consequences and Opportunities for Peace”.

• Dr. Namrata Goswami, Research Fellow at the Institute for Defense studies and Analyses of New Delhi. Dr. Goswami is one of the foremost Indian thinkers on long term global trends, emerging security challenges and scenario building. She is routinely called to advise government officials.

• Subir Bhaumik, one of the India’s veteran journalist and a well-known.

 In June 2014, RBF Germany decided to deal with the situation in the emerging democracy in Myanmar and consequently organized a hearing at the Bundestag about “Religious violence in Myanmar: The darkside of democratization”.

• Dr. Khin Zaw Win, Tampadipa Institute in Myanmar, served with the Ministries of Health in Myanmar and Malyaisia. Member of a Peace Building Committee.

 On 27th of March 2014, RBF Germany attended together with RBF France a working meeting with the leadership of the PFD-Parliamentary Forum for Democracy at the European Parliament in Brussels in order to discuss possible partnership in promoting Democracy in the world.

 In 2015 and 2016, additional working meetings were organized between RBF France and RBF Germany and the PFD – Parliamentary Forum for Democracy and follow up meetings regarding Genocide prevention with the different Civil Society Representatives and High level Policy makers who attended the RBF Conferences and the RBF raising awareness campaigns in the previous years.

 Further to those meetings, RBF Germany also organized 2 Conferences, and an awareness raising campaigns to alert the German civil society representatives and senior German Policy makers about the serious deterioration of Human and Civil Rights in Thailand under the military junta.

The first Conference on that topic: “Thailand on the road to Democracy?” was organized in Berlin on the 16th of March 2016 and the leading experts were:

• Professor Pavin Chachavalpongpun, former Thai diplomat and Researcher at the ASEAN Institue on South East Asia and Associate Professor of Southeast Asian studies at the Kyoto University in Japan

• Peter Leyland, British constitutional lawyer, Metropolitan University of London, author of several books and papers on constitutional systems in the world and also particularly about Thailand.

 Many representatives of the German civil society and Human Rights associations in Germany attended the Conference and reflected on the exchange of views.

 The second Conference took place on the 31st of May 2016 and focused on an “Violations of Human Rights as obstacles on the way of Thailand to Democracy”.

The experts commissioned were:

• Thomas Gambke, MdB, Alliance 90/The Green, Chairman of the ASEAN parliamentarian group, member of the committee for Finances

In 2018 and 2019, RBF Germany partnered with the March of Hope and Remembrance (MoRaH) from Austria and with the European March of the Living Network to organize in close collaboration with the City of Orianenburg, the first of ots kind delegation of German High School students to the 2019 March of the Living.

Human Rights and the return of Thailand to Democracy

Hearing at the Bundestag: Human Rights and the return of Thailand to Democracy – 31/5/2016 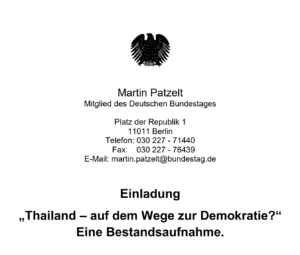 Thailand on the road to Democracy? 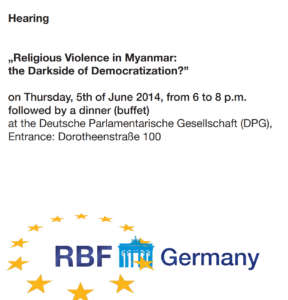 Religious Violence in Myanmar: the Darkside of Democratization? – 5/6/2014 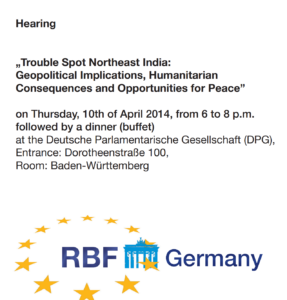 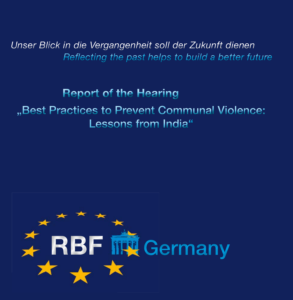 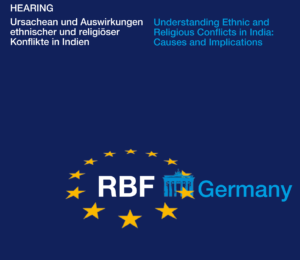 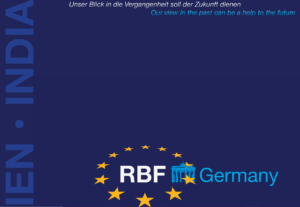 Ethnic and Religious Minorities in the World’s largest Democracy

Parliamentary hearing: Human rights situation in India with special regards to Ethnic and Religious Minorities in the World’s largest Democracy – 12/6/2013